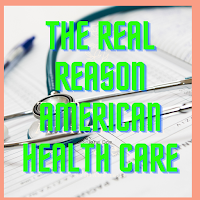 It's the private insurance system that makes health care in America so expensive. Conventional wisdom says that the government is more expensive than in the private sector.

"It can't say no. It's corrupt, it's inefficient, it's slow." "If you want something done right you give it to the private sector." That is what we hear in America all the time.

And yet here we are with the biggest private-sector spending the most. If you look at the data on physician visits and hospital discharges, you can get rid of one theory.

The difference between us and them is that we pay more. Every time we go to the doctor for everything from angioplasty to a hip replacement from a c-section to a pain reliever.

In America, the price for the same procedure at the same hospital, it varies enormously depending on who is footing the bill.

The price for someone with public insurance like Medicare or Medicaid is often the lowest price. These groups he covers so many people that the government can demand lower prices from hospitals and doctors and they get those lower prices.

And each one has to negotiate prices and hospitals and doctors are on their own. And if you're uninsured, you have even less leverage. Nobody is negotiating on your behalf.

So you end up paying the highest price. One study found that most hospitals charge uninsured patients four times as much as Medicare patients for an ER visit.

Other countries, they don't have this problem. Instead of every private insurance company negotiating with every healthcare provider. There's just this big list.

The country, the central government, they go and they say, "If you want to sell to us, to all of our people, then here's what you can charge for a checkup. Here is what you can charge for an MRI or a prescription for Lipitor. And so then whether that bill goes to the heavily regulated private insurance companies in Germany or directly to the government like in the UK”.

Each country is telling the doctor or hospital or drug company how much that bill will be. And because the government controls access to all of the customers. It's an offer that hospitals and doctors and pharmaceutical companies typically can't refuse.

"I'm going to make him an offer he can't refuse." In America, the idea is that you'll be a consumer. That you'll do what you do when you go to Best Buy and buy a television. But that just doesn't work in healthcare.

It doesn't work in healthcare because you often come and get health care when you're unconscious, in an ambulance, when you're scared, when it's for your spouse or your child It is a time when you have the least bargaining power.

You are not usually capable of saying, 'No.' You're not knowledgeable enough to do it, you're not comfortable doing it, or you're not conscious enough to do it. That's why in other countries the government is a person who can say 'No' for you. You can say, 'No, that's too expensive you're going to have to lower your price' because they do have that power.

Anchor: A new push for single-payer health care right here in the US.

Demonstrator: What do we want? Crowd: Single-payer!

Demonstrator: When do we want it?

Crowd: Now! Anchor: California and others are saying maybe we should adopt the European model.

Klein: If we decided to create a single-payer system with one of these huge price lists in the US There would be nothing to stop lobbying from hospitals from doctors from drug companies. And those prices would get influenced. So we could end up with a single-payer system that is expensive. Even as expensive as our current system. It all depends on how much you negotiate down the prices and now in America, these groups have so much power because they are so rich. That it's really hard to get them to bring down the prices.

This is the irony of American healthcare: It's so expensive that it's become hard to make it cheaper. All that money they make, that becomes political power.

Under a single-payer system if we did drive prices down, doctors and hospitals they would be paid less than they are right now.

That might mean some of them close or some go out of business or some move. It would be really painful.

One person's waste is another person's essential service or local hospital or their income. But then single-payer it's not an all-or-nothing choice.

For instance, there's a really interesting section of Bernie Sanders Medicare-for-all bill. Where he lays out this interim plan. It's a plan he wants while he's setting up his new single-payer system. And in that plan, he expands Medicare to cover vision and dental.

And he opens it to nearly everyone. Not just people 65 and older. All kids go on Medicare automatically and most adults can buy-in. That plan, on its own, it wouldn't get American health care spending far down overnight.

But it would at least begin to recognize what we already know and what most other countries already do: That health care is one of those things the government can do cheaper and better than the private sector.

Popular posts from this blog

August 18, 2020
Car insurance is one of those pesky expenses that we just won't ever get rid of. If you're looking at car insurance for your teen or you're a teen yourself, then you might quickly realize that car insurance can get really expensive. We're going to take a look at why car insurance is so expensive for teens and how to keep costs low. (light music) Hey guys, welcome back to the College of Investor Investing and Personal Finance For Millennials. So, I never thought that I would be passionate about car insurance until I started paying into it and realizing just how expensive these rates can be. This is especially true for teens. Now according to the CDC, teens ages 15 to 19 make up 6.5% of the US population and they make up 8% of motor vehicle accidents. It's true that teens are new drivers. Insurance Premium time decay You're inexperienced, you just started driving so car insurance companies are going to view that as more risky because y
9 comments
Read more

You should know 10 steps how to buy a car insurance

August 16, 2020
Many peoples are confused before buying car insurance. Buying a car may be some easy task because if you go to car showroom salesman tell about all feature about cars and benefits of those cars. But the same thing is not happened in financial terms many car buyers want to buy car insurance but they don't know about the full benefits of car insurance they just buy for its formalities. If you choose the right options for the product then you get lots of benefits. If you have lots of analytical thinking then you may save lots of amount to insured your car. We will elaborate here How to Buy Car Insurance to get lots of benefits from insurance. Follow these helpful hints before you sign on the dotted line You will need A credit report Knowledge of local law, Careful consideration Competing quotes Extra coverage A credit report Knowledge of local law Careful consideration Competing quotes and extra coverage. I will tell you how to get car insurance in a step by step p
7 comments
Read more

August 06, 2020
How to find out best Mutual Fund in 2020? Today we will learn about those mutual funds they have given the best returns in the past one year talking about the best returns. If some had negative returns and were in loss we will discuss, which one gave the best returns with minimum loss. This will give you an idea that which the mutual fund has performed well in the past when the market was volatile, But let me tell you first that you should never invest in any fund just by checking the returns. But yeah, returns do tell you how well a mutual fund performed while others did not during a volatile market phase. Which mutual fund in those categories had performed well in the last one year we will discuss in brief. The best mutual fund in the large-cap the category which gave the best results and exactly how much was the return? And if we compare it to its category average then how will be returning. Large Cap The large-cap category and the mutual a fund that gave
Post a Comment
Read more